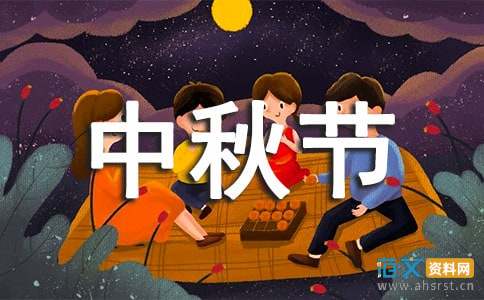 In mid-autumn, farmers have just finished gathering their crops and bringing in fruits from the orchards果园. Overjoyed狂喜的 with the bumper丰富的 harvest, they feel quite relaxed after a year's hard work. So the 15th of the eighth lunar month has gradually evolved as成为 a widely celebrated festival for ordinary people.

Night falls. The land is bathed in silver moonlight, as at this time of the year the weather is usually fine and the sky usually clear. Families set up tables in their courtyards 庭院or sit on their balconies, chatting and sharing offerings祭品 to the moon. Together they enjoy the enchanting迷人的 spell of night. Naturally at this pleasant moment people are reminded of beautiful legends about the moon. The most popular in China is an ancient story telling how a girl named Chang'e flew to the moon.

Long long ago， a terrible drought干旱plagued折磨；困扰 the land. Ten suns burned fiercely猛烈地 in the sky like smoldering 情绪郁积的volcanoes火山. The land was parched烤, and rivers went dry. Many people died of hunger and thirst. Then there appeared a brave young man named Hou Yi who took out his red bow and white arrows箭and shot down nine suns one after another一个接一个的. The weather immediately turned cooler and heavy rains filled the rivers with fresh water. Life was restored恢复 on the earth and humanity was saved.

A beautiful girl secretly fell in love with the hero, who also loved the sweet girl. Soon they got married.

Out of respect for what he had done for his people, the goddess of the western sky rewarded the brave young man with a special drink that could give its drinker eternal永恒的 life in the heaven and made him an immortal being生命.

But an evil-minded person got to learn the secret and he managed to kill the hero by a sudden attack. The murder done, he ran to Chang'e who was waiting for the return of her husband from hunting. The wicked邪-恶的 murderer谋杀者 forced强迫 the wife to give him the drink. Without hesitation犹豫, the wife in her desperation绝望的境地 took up the drink and drank it in one gulp大口的.

Overcome with grief悲痛, the faithful忠诚wife rushed to the dead body of her husband and wept bitterly悲痛地. But soon the drink began to take effect and Chang'e felt herself lifted up from the ground towards heaven.

She had to live on the moon because it is nearest to the earth where her husband lay lifeless无生命的 and cold. She was alone and sad, never able to get back to earth.

For thousands of years the Chinese people have related涉及 the vicissitudes兴衰 of life to changes of the moon as it waxes渐满 and wanes渐淡的: joy and sorrow, parting and reunion. Because the round, full moon is a symbol of reunion and happiness, the mid-autumn day when the moon is at its fullest and brightest is naturally taken as the festival. In the Chinese written language, the word圆满(pronounced as "yuan man") means round and full literally字面上地, and metaphorically 暗喻it suggests family reunion and perfection 完美of life in the world. Every family would try to enjoy a happy reunion of its members in hoping for a more perfect life in future. Those who cannot return home on this day to watch the bright moon together with their dear ones always feel deep longing for their family. One of the most famous poets in the Tang Dynasty, Li Bai, expressed his longing for home place

in a short poem that has become known even to three-year-old kids for thousands of years. It runs like this:

Before my bed shine bright the silver moon beams,

It seems autumn frost on the chamber floor gleams.

Gazing up toward the full moon in the night skies,

I can't but lower my head as homesickness乡愁 does arise上升.

Today festivities欢宴，庆典 centered about the Mid-Autumn Day are more varied. After a family reunion dinner, many people like to go out to attend special performances in parks or on public squares. Some groups or clubs of retired people would hold gatherings or parties for appreciation of the moonlight.

Among all the ways to celebrate this particular occasion, one traditional custom has definitely remained unchanged and is shared by almost every Chinese. That is eating a special kind of food: moon-cakes. Most of these cakes are made in a round shape, again a symbol of the full moon. There are a number of fillings wrapped缠绕，包裹 inside the cakes, so it's also a golden time for markets and department stores to sell these special cakes to citizens市民 before and during the festival. They are really delicious, and it's not uncommon for people to send moon-cakes to friends and relatives as Mid-Autumn gifts. While eating the tasty moon-cakes and gazing at the bright moon in the night sky, people feel sweet and happy at heart.

"Zhong Qiu Jie", which is also known as the Mid-Autumn Festival, is celebrated on the 15th day of the 8th month of the lunar calendar. It is a time for family members and loved ones to congregate and enjoy the full moon - an auspicious symbol of abundance, harmony and luck. Adults will usually indulge in fragrant mooncakes of many varieties with a good cup of piping hot Chinese tea, while the little ones run around with their brightly-lit lanterns.

"Zhong Qiu Jie" probably began as a harvest festival. The festival was later given a mythological flavour with legends of Chang-E, the beautiful lady in the moon.

According to Chinese mythology, the earth once had 10 suns circling over it. One day, all 10 suns appeared together, scorching the earth with their heat. The earth was saved when a strong archer, Hou Yi, succeeded in shooting down 9 of the suns. Yi stole the elixir of life to save the people from his tyrannical rule, but his wife, Chang-E drank it. Thus started the legend of the lady in the moon to whom young Chinese girls would pray at the Mid-Autumn Festival.

In the 14th century, the eating of mooncakes at "Zhong Qiu Jie" was given a new significance. The story goes that when Zhu Yuan Zhang was plotting to overthrow the Yuan Dynasty started by the Mongolians, the rebels hid their messages in the Mid-Autumn mooncakes. Zhong Qiu Jie is hence also a commemoration of the overthrow of the Mongolians by the Han people.

During the Yuan Dynasty (A.D.1206-1368) China was ruled by the Mongolian people. Leaders from the preceding Sung Dynasty(A.D.960-1279) were unhappy at submitting to foreign rule, and set how to coordinate the rebellion without it being discovered. The leaders of the rebellion, knowing that the Moon Festival was drawing near, ordered the ma-ki-ng of special cakes. Packed into each mooncake was a message with the outline of the attack. On the night of the Moon Festival, the rebels successfully attacked and overthrew the government. What followed was the establishment of the Ming Dynasty (A.D. 1368-1644). Today, moon cakes are eaten to commemorate this event.

Mid-Autumn Day is a traditional festival in China. Almost everyone likes to eat mooncakes on that day. Most families have a dinner together to celebrate the festival. A saying goes, "The moon in your hometown is almost always the brightest and roundest". Many people who live far away from homes want to go back to have a family reunion. How happy it is to enjoy the moon cakes while watching the full moon with your family members.

carry the lantern around 提灯笼

activities are all around "month", so they are commonly known as the "month quarter", "YueXi", "after month quarter" and "play", "worship on day on day"; In tang dynasty, and the Mid-Autumn festival was known as "straight month". The Mid-Autumn festival began in song dynasty, to the popularity of Ming and qing dynasties, and New Year's day, has become the major in China as one of the festival. About the origin of the Mid-Autumn festival, generally there are three: to the worship of ancient originated in the month, and next month the custom of song and dance mate-seeking seniors, ancient worship of god for autumn land. For YiSu down the national culture, enhance national cohesion, the Mid-Autumn festival since 2015 listed by the state council as one country legal holidays. Country attaches great importance to the protection of non-material cultural heritage, May 20, 2015, the festival with the approval of the state council listed in the first national nonmaterial cultural heritage list.

The Spring Festival is the most important festival in

China.People usually decorate the doors and windows with red pa-pe-rcuts.becouse red means good luck.People usually clean house too.becouse they want to sweep away bad luck.Children can get some new clothes or presents from their parents and grandparents.

On New Year's Eve,family always have a big dinner.Everybody are watch TV and talk.In the midnight,there usually fairworks. On New Year's Day,people usually put on their new clothes and visit their femily and friends.They usually say:"Happy New Year's Day."

The Spring Festival finishes at the Lantern Festival after two weeks.People usually eat a kind of rice dumpling called yuanxiao.It can take people good luck all the year round.

When will the moon be clear and bright?

With a cup of wine in my hand, I ask the blue sky.

I don't know what season it would be in the heavens on this night.

I'd like to ride the wind to fly home.

Yet I fear the crystal and jade mansions are much too high and cold for me.

Dancing with my moon-lit shadow,

The moon rounds the red mansion Stoops to silk-pad doors,

Shines upon the sleepless Bearing no grudge,

Why does the moon tend to be full when people are apart?

People may have sorrow or joy, be near or far apart,

The moon may be dim or bright, wax or wane,

This has been going on since the beginning of time.

May we all be blessed with longevity Though far apart, we are still able to share the beauty of the moon together.

The Mid-Autumn is a very important Chinese festival. It falls on the 15th day of August. A few days before the festival, everyone in the family will help to make the house clean and beautiful. Lanterns will be hung in front of the house.

On the evening there will be a big family dinner. People who work far away from their homes will try to come back for the union. After dinner, people will light the lanterns which are usually red and round. Children will play with their own toy lanterns happily.

At night the moon is usually round and bright. People can enjoy the moon while eating moon-cakes which are the special food for this festival. They can look back on the past and look forward to the future together. It is said that there was a dragon in the sky. The dragon wanted to swallow up the moon. To protect the frighten the dragon away.

Mid-autumn Day is an ancient Chinese festival. On that day, people always get together to eat moon cakes and raise the lantern. As the lunar calendar new year, it is also an important festival when people get together to celebrate the family union. They are sitting together, appreciating the beautiful moon, talking, singing songs about moon and showing their love to each other until

midnight. What a happy prospect!